What is the Two-Track/Local Track?

For detailed information about the Two-Track system, which is a feature of the Pension Adjustment System whereby your pension is calculated and maintained both in US dollars and in the currency of the country where you actually reside, please see the Fund’s informative page on Two-Track or our Two-Track tutorial.

The following should provide you with, hopefully, a better understanding of the Two-Track System.

The Two-Track system is composed of two elements, the dollar track and the local track.

The local track pension is calculated by converting the value of your dollar track (see above) on the first day of your retirement, at an average exchange rate between the United States Dollar and the currency of your country of residence (this average is computed over the 36 consecutive calendar months up to and including the month of your separation from service). Once established, it will be adjusted, based on the cost of living of your country of residence.

How does it work?

Once you elect to switch to the Two-Track, you would now have two pension values, i.e., Dollar Track and Local Track. Each quarter, the Fund shall compare these two values and pay you the higher amount, subject to a maximum amount (which is 110% of the value of the Local Track value) and a minimum (which is 80% of your Dollar Track Value). Such feature provides stability as it avoids fluctuation of the monthly pension in local currency terms.

Can I change the country of residence under Two-Track/ Local Track?

The Two-Track system is a feature of the Pension Adjustment System whereby your pension is calculated and maintained both in US dollars and in the currency of the country where you actually reside. This feature is thus composed of two elements, the dollar track and the local-currency track or local track.

All pensions are calculated initially in US dollars, that is to say, on the “dollar track”. If you do not declare a country of residence but request payment in a currency other than US dollars, your pension will remain on the dollar track but would be converted by the Fund to the local currency equivalent on a quarterly basis by using the applicable UN operational exchange rate.

If you go on the local track, the UNJSPF will still calculate your pension based on the dollar track and each quarter the two (i.e. the local and dollar tracks) will be compared and you would be paid the higher amount, subject to a speciﬁed maximum and a speciﬁed minimum. It is possible that the dollar track would sometimes be more beneﬁcial than the local track, and vice versa. Please remember that the decision to go on the Two-Track system is an option, not an obligation.

How does it work?

Your pension is calculated initially in US dollars. If you elect to provide proof of residence in a country other than the United States, the Fund would establish your local-currency track pension. Your local track pension is calculated by converting the value of your dollar track pension on the ﬁrst day of your retirement, at an average exchange rate between the United States dollar and the currency of the country of your residence (this average is computed over the 36 consecutive calendar months up to and including the month of separation). This local track amount is your protection against future ﬂuctuations of the exchange rate.

Furthermore, as from 1 April 2005, a new provision took effect for an adjustable minimum guarantee amount which ensures that your beneﬁt will not be smaller than either your US dollar monthly base amount [converted to the local currency using the applicable quarterly exchange rate] or 80 per cent of your adjusted U.S dollar track. A simpliﬁed graphic illustration of the Two-Track feature is provided in the centerfold of the Two-Track brochure. A more detailed example of the Two-Track feature in operation, from a speciﬁc separation date, is provided in a spreadsheet on the last page.

What about future adjustments?

How do I know if it is beneficial for me?

To ﬁnd out whether the Two-Track system may be advantageous, you may wish to contact the Fund at any time after you separate from service to obtain an estimate that would contain the 36 months average exchange rate applicable to you.

What are the consequences of applying for the Two-Track system?

Once you have submitted proof of your country of residence you remain permanently on the Two-Track system. You will not be able to revert solely to the dollar track unless you meet the conditions outlined in section N of the UNJSPF Pension Adjustment System. In countries where a currency undergoes devaluation without offsetting adjustments for inﬂation, opting for the Two-Track system may result in your receiving less in US dollar terms than you would receive had you remained solely on the US dollar track.

Therefore, it is essential that you consider very carefully the question of whether and when to submit proof of residence to qualify for the Two-Track adjustment system. 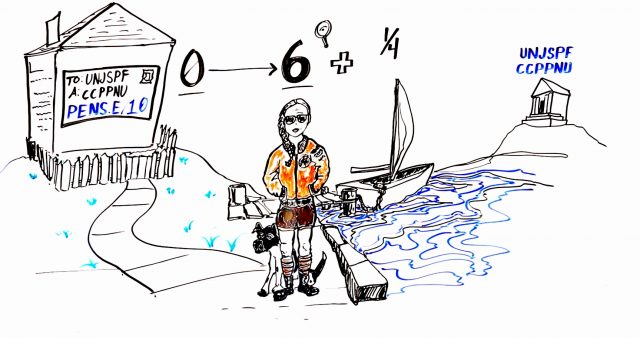 Before you decide to switch to the Two-Track, we strongly recommend that you request for an estimate of your benefit under the Two-Track, providing us with your preferred country of residence. This will give you an idea as to whether switching to the Two-Track would, indeed, be advantageous. We should be able to run an estimate once the processing of your benefit is complete, following submission of your payment instruction form upon your separation from service.

Once you have decided to switch to the Two-Track, you must fill out UNJSPF form PENS.E10 (Declaration of Country of Residence) form and return the same duly completed, date and signed with your signature in original ink, along with a certificate of residence dated no more than 3 months prior to submission. This certificate of residence must be in a form of a statement from a local government officer or local police, confirming that you indeed reside in the declared residence, contained in their letterhead and signed with their seal of office.

Can I apply for the Two-Track system regardless of the amount of time I spend in my country of residence?

No, the requirement is that a beneﬁciary must be spending at least six months of every year in his or her declared country of residence. The question is not one of “legal residence”, but of actual physical presence.

What documents are required?

When should I submit my application?

You may provide proof of residence at any time after your date of separation. If you provide acceptable proof of residence within six months of your beneﬁt coming into payment, the Two-Track system would become effective from the date on which the beneﬁt payments commenced.

If proof of residence is received after the initial six-month period, your beneﬁt would still be recalculated as from the date of your entitlement, but payment under the Two-Track system would begin only from the quarter following the one in which the proof of residence was received.

Please mail the original form PENS.E10 affixed with your signature in original ink along with the original certificate of residence via certified mail with receipt confirmation and tracking information to the Fund at the address available at this link.

To find out whether the Two-Track system may be advantageous, you may wish to run an estimate at any time after you separate from service inside MSS. The new estimate feature aims at providing you with a better understanding of whether it could be of interest to you to select this option. You would run the estimate providing your country of residence and the estimate would automatically contain the 36-month average exchange rate applicable to your pension case at your date of separation.

Obviously, this estimate will not prejudge on whether the benefits of selecting this option would remain the same in the long term. Inflation (and currencies) in given countries and the US can follow different paths while there are maximum and minimum levels of possible adjustments.

Who will be able to run Two-Track estimates in MSS?

The vast majority of retirees and beneficiaries with a separation date on or after 03 August 2015 will be able to run Two-Track estimates with the exception of a few special cases.

Who will NOT be able to run Two-Track estimates in MSS?

What if I cannot run Two-Track estimates in MSS?

No problem, we can run a Two-Track estimate for you, please submit your request together with the information of the country of residence for which you would like to obtain an estimation through our online contact form.

If I elect to have my benefit paid under the Two-Track system will I be required to confirm that I continue to reside in my declared country of residence?

Yes, a certiﬁcate of entitlement will be sent to you on an annual basis, which you must sign, and return to the Fund to conﬁrm continued eligibility for your beneﬁt under the Two-Track system in your declared country of residence. It should be noted in this connection that any willful misrepresentation or falsiﬁcation of signature on this certiﬁcate will be considered fraud.

What should I do if I relocate to a different country whilst on the Two-Track system?

If you move to another country, you will have to submit a new proof of residence and the Change of Country of Residence form PENS.E/11 no later than six months from the date of your arrival in the new country, in order to have your pension determined in the currency of your new country of residence and adjusted according to its consumer price index. Although you have 6 months to do so it is in your interest to have your beneﬁt recalculated rapidly to avoid possible overpayment recovery. Your beneﬁt will then be re-calculated as if you had always resided in the new country, by applying the same rules as above (see question “How does it Work?” above). Thereafter the local-currency track amount is adjusted by the movement of the CPI of the new country. Special provisions may apply if you return to your country of nationality.

If I relocate to the USA, what happens?

If you relocate to the USA, then your local-currency track would be the same as your dollar track as long as you continue to reside in the USA. In this scenario, you would also remain subject to the Two-Track pension adjustment system and should you subsequently relocate you would have to provide proof of residence in the new country. ATTENTION !!!! Your stable entitlement is the local-currency track amount only!!!!

Any extra income generated by the exchange rate variations, i.e. movement within the 10 per cent CAP (formerly 20%) over the local track amount, should be viewed as a temporary bonus resulting from the ﬁnancial markets ﬂuctuation and does not represent, as often erroneously perceived, a permanent acquired right.