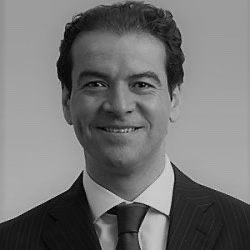 Acting Representative of the Secretary-General for the investment of the assets of the UNJSPF since April 2020, Mr. Guazo is Director of the Finance Division and Deputy Controller in the Office of Programme Planning, Finance and Budget of the United Nations Department of Management Strategy, Policy and Compliance in New York, since 2012.  He served in a similar capacity as the Director of Finance and Treasury at the United Nations World Food Programme (WFP) in Rome (2010-2012).

With over 10 years of experience in high level management positions in the United Nations system, together with more than 17 years of experience in the private and public sectors, Mr. Guazo brings a balance of deep knowledge of the United Nations system and expertise in national, regional and global practices for financial and pension fund systems.

During a 15-year banking career, he contributed to the modernization of the Mexican Financial System, while serving as its regulator and supervisor.  As Chief Financial Officer (CFO) and Treasurer at the Federal Mortgage Bank of Mexico (2008-2010), he negotiated and managed loans from the World Bank and the Inter-American Development Bank.  He championed financial inclusion among people with low and middle incomes as CFO and Treasurer of the National Savings and Financial Services Bank of Mexico (2001-2008).  His government service included posts at the Ministry of Finance (1999-2001) and at the National Banking and Securities Commission (1996-1999), as a member of its Financial Sector Supervisory Body.  He started his professional career in 1993 at PricewaterhouseCoopers.

A former professor of Finance at the Instituto Tecnológico Autónomo de México (ITAM), Mr. Guazo received an International Executive MBA from the Instituto de Empresa Business School in Madrid.  He earned a master’s degree in Business Economics from Instituto Tecnológico y de Estudios Superiores de Monterrey and graduated from ITAM in 1996 with a bachelor’s degree in Accounting.  He is fluent in English, Spanish and Italian.